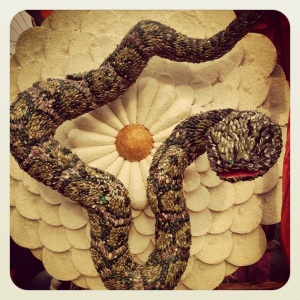 This post aims to provide an impression of the traditions associated with Omihachiman’s Sagicho Matsuri by drawing on themes which emerge from the image above. It will look at how the floats are constructed and examine the participation of children in what is widely regarded as one of Japan’s most dangerous matsuri. Ultimately, all of the floats assembled, paraded and fought with by the people of Omihachiman succumb to the flames and fervour of the festival when darkness falls on the final day.

This photograph was taken at Sagicho Matsuri on March 17th 2013, the year of the snake. This zodiac symbol adorned one of the festival’s smaller floats, which are assembled and carried by elementary school students. Throughout the area children can be seen standing proudly by their floats complete with brightly coloured hair and makeup for the occasion, homage to flamboyant warlord Oda Nobunaga who wore make-up and danced while enjoying the new year’s festivities at Azuchi in the 16th century. Nobunaga’s followers are said to have established Omihachiman’s Sagicho Matsuri following their move from Azuchi to Hachimanyama Castle.

The snake, above, was painstakingly decorated with beans and seeds to create a lifelike texture and colouration. It is suspended in front of a floral-design backdrop. The thirteen neighbourhoods of the old castle town spend the long winter months designing and constructing zodiac themed floats. These designs are judged on the first day of the festival, flags are displayed proudly on the floats denoting how highly each effort ranks. Designers must consider both aesthetic and structural factors. During the fighting teams attempt to flip their rivals, so what is produced must be strong, sturdy and well weighted but also light enough for the people of the neighbourhood to carry it on their shoulders. Groups with fewer members tend to focus on smaller more aesthetic floats as a result.

Each float is required to include a two metre high tower woven from fresh straw and, a long bamboo pole decorated with strips of red paper and tokens of good luck. In total, these structures can weigh over a tonne. The year’s zodiac animal, which is mounted on the centre of the float, must be made from marine or agricultural produce in the hope of a fruitful harvest for the coming year – common materials include dried fish, kelp and tapioca.

The children of each neighbourhood are responsible for decorating their own small floats to be carried alongside the main one. By involving children in the construction process from an early age, techniques and commitment to this local culture can be passed from generation to generation. The children of the town are allowed to fully participate despite the obvious dangers. As the festival draws to a close, a mock fight is staged between the main float and the children’s float. The children theatrically come out on top against the exhausted adults and they celebrate their victory raucously. This event was described as “conditioning” by a festival veteran as the way of the matsuri becomes engrained in the child’s mindset.

By the time they reach junior high school children can be seen competing with adults on the main floats, boys as young as thirteen hang from the top of the floats as they attempt to gain leverage over their rival. As the floats fall the danger of injury is very real, blood can be seen running down the faces of competitors, some are even carried away on stretchers. Alcohol flows freely and tensions run high, fights often break out between competing groups. To the foreign observer it would seem that this is not a place for children.

As night falls, men, women and children dance around the burning pyre in celebration, beating the zodiac symbol with bundles of straw. It is said that after The Great East Japan Earthquake struck in March 2011 the rabbit received a particularly vigorous beating for the misfortune the year had brought to the people of Japan. This shows that the participants remain acutely aware of the meaning behind the symbols of the festival and the rituals being performed.

Traditional festivals appear to be thriving across Japan, supporting local economies and attracting visitors from far and wide. This suggests that the policy of involving children from the preparation process onwards has ensured tradition survives. It is common for children to be introduced to their local culture and festivals from an early age – this enables them to gain an appreciation for the unique culture of the local community and creates a desire to preserve tradition. It is common for elementary students to prepare for local festivals at school and this strengthens community spirit and a sense of local identity. The time and effort invested in preparing for and participating in Omihachiman’s Sagicho Matsuri is reflected in the euphoria generated as the festival comes to a close.

More information about this festival which is staged over a full weekend each year in mid-March can be found here – http://www.omi8.com/maturi/sagicho.htm

Katsuura is a rural town of around 6,000 people lying roughly 12 miles south-west of Tokushima City. The town is known locally for growing mikan oranges and for hosting one of the largest doll festivals in Japan.

The origins of doll festivals in Japan can be traced back to the mid-Heian era, 1000 years ago. Rituals using dolls as human representations were carried out in early March to drive out evil spirits. They were purified with water – washed, sent down river and out to sea. These beautiful dolls are still viewed with suspicion, the reason so many are donated by the public is that they are thought to bring bad luck if disposed of when the owners no longer have room for them.

Young girls from wealthy families had long enjoyed playing with dolls, early examples of which can be viewed in both Katsuura and the Tokushima Castle Museum. This custom soon spread to all levels of society. From the beginning of the Edo period dolls became popular gifts for newborn girls, doll markets were held in major towns and the dolls themselves became more elaborate and valuable. In response, the Shogunate issued decrees to keep the majority of dolls plain, simple and low cost.

In the Meiji period, the government discontinued hina events, partly due to their feudal associations. New national holidays were established. Nevertheless, the tradition remained popular – Children’s Day was made a national holiday in the postwar period and the doll festivals gradually returned.

In 1981, a harsh winter hit agricultural production in Katsuura and the townspeople decided to host an annual festival to reverse the town’s fortunes. In 1985 a committee was formed and the decision to host “The Big Hina Doll Festival” was reached. The committee set about collecting enough dolls from residents of the town, and further afield, to fill a 100 stepped pyramid 3.4 metres high. The first festival was held over two days in April 1988.

Over time, the festival became more and more popular so it became easier to source dolls to display. People from across the country send dolls and doll cases to Katsuura Town Office every year. Approximately 10,000 dolls are donated annually with 30,000 dolls on display in total. The festival, which now runs from late February to early April, receives a great deal of media coverage and the town receives more than 30,000 visitors each year. At the end of the festival surplus dolls are given to visitors as gifts and hina dolls have been officially sent to more than twenty countries as international gesture of goodwill. In 2004 the festival organisers acquired a disused woodwork factory and transformed the space into an exhibition hall, a symbol of the shift of the town’s economy from agricultural production to tourism.

The Big Hina Matsuri in Katsuura supports the local economy while being a great source of community pride and purpose. This is particularly important at a time when many small towns across Japan are facing an uncertain future. This renewed sense of community purpose and the boost to the local economy is reminiscent of the Awa Odori festival in the prefectural capital. However, like many other ‘traditional’ Japanese festivals across the country, the motivations for hosting the festival and the history of the event are more recent than they may appear.

ビッグひな祭り will be on display in Katsuura until April 7th this year!